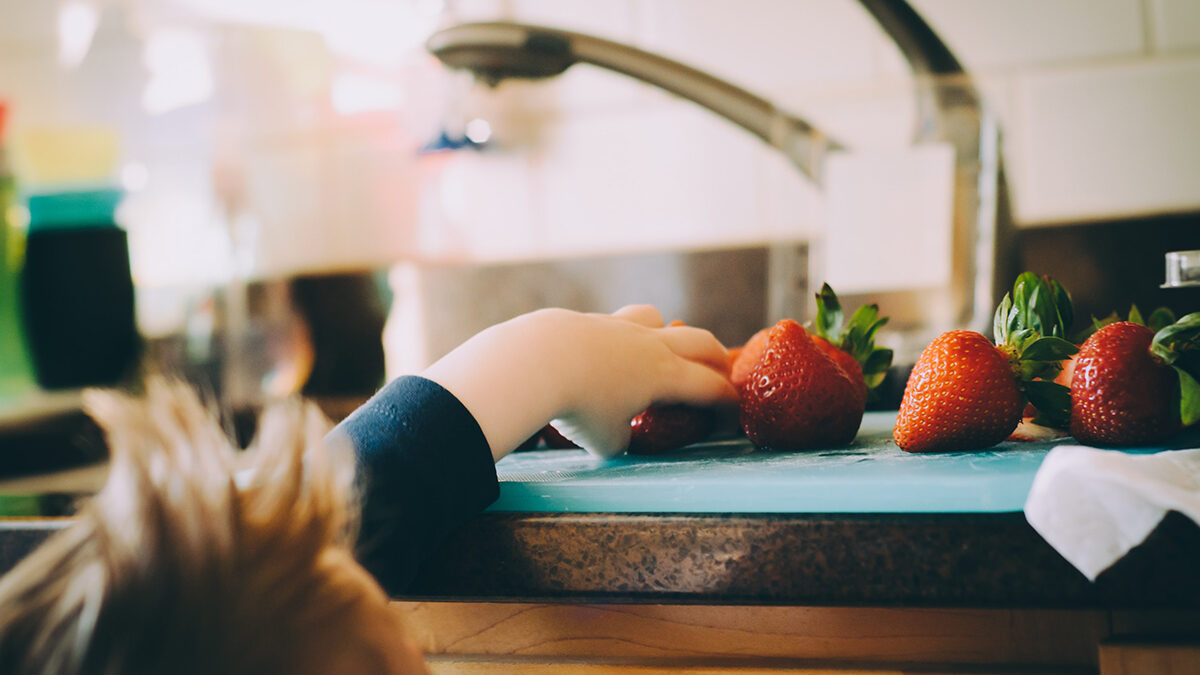 I’ve got two children of my own, a five year old, Lily and a two year old, Penelope.

Both my daughters started out really well when it came to eating. Penelope has just turned two and is like a garbage truck, you can feed her anything. Lily started out like this, she ate everything, and I mean everything! But over the last 8-12 months Lily has become a very picky eater. This has been a huge challenge in our household. I don’t want to be making multiple dinners and I want to sit down as a family and eat the same meal. So about 6 months ago I started researching strategies in regard to picky eaters and how the situation can be helped. I’ve spent hours looking into this and tried many strategies with Lily. Some have been great, some not so great. But, I’m also aware that she changes all the time and I’m hoping this might just be a stage, so I try not to put too much pressure on the situation.

Below are my ten strategies that I’ve tried and found to be successful when it comes to picky eaters.

Here are my ten tips to keep that grocery bill down and cut costs on our supermarket shop.

1. Introduce new foods, but not all at once.

It can take up to 12 exposures of a new food for children to come around to it. The first time they see it on the table, they might refuse, but even this exposure is helpful, and they may be more inclined to have a taste next time.

2. Get your kids involved.

A child is more likely to eat the food if they feel like they have had some control and are involved in either growing, choosing, or preparing it. Take them to the shops and let them choose a couple of foods that they may want to try (eg. from the vegetable section). Have them join you in the kitchen and give them an easy preparation task which involves using the new food, such as tearing lettuce, whisking eggs or stirring muffin batter. Make it fun for them, the goal is to get kids excited about eating and meal times.

Toddlers and children can often be tired at dinner time and sitting up to a big serving of a new food can be enough to set them off and into refusal mode. Serve small portions of new food, alongside more substantial foods that you know they enjoy. If they decide they don’t want to eat them, don’t force them. You can try the new food another time. If you’ve served smaller portions, there is also less waste, which is a bonus.

4. Refrain from forcing your child to finish their whole plate.

I think most parents reading this are familiar with this one. When I was a child, it was very common to have to sit at the dinner table until your entire plate was finished. I can still remember these uncomfortable times.  I personally feel and research also suggests that this creates negative feelings towards food. It doesn’t make mealtimes enjoyable for anyone and it also doesn’t teach our kids to stop eating when they feel satisfied, which is a really important skill to learn from a young age.

We’ve all seen it before, if your child has a snack an hour before dinner, of course they are going to sit up and barely touch their dinner. Try and stick to three main meal times (breakfast, lunch and dinner) and two snack times (mid-morning and mid-afternoon) each day. This creates routine for toddlers and children and therefore they know what to expect. They will be more likely to eat their meals because they actually feel hungry when the time arrives.

6. Offer a spread and let them choose.

I do this with my Lily a few nights a week. If we are having tacos or wraps, I’ll lay out all the different fillings on the family dinner table and let her select what goes in her wrap/taco. Same goes for pasta night, instead of combining everything in the kitchen, I’ll lay out the spaghetti, meat sauce, grated cheese, lettuce leaves, cucumber rounds and tomatoes in bowls and let her pick what she feels like for the meal. If she chooses just spaghetti and cheese, that’s fine. I do find that she often chooses to have some veggies as well, it just depends what she feels like on that particular night and how hungry she is.

I went through a stage of having a back up meal for Lily when I thought she may not eat the dinner that the rest of us was having. This was not a good idea. Lily soon discovered that she could basically order as if she was in a restaurant and have a special meal whipped up for her in minutes every single night. I also discovered that it wasn’t exposing her to new foods and encouraging health eating habits. We stopped this one very soon after. If your child won’t eat their dinner, allow 30 minutes, clear their plates and only offer a piece of fruit before bed.

Ok hear me out. This might sound absolutely mad, especially if you grew up with the “dessert after dinner” rule, but it can actually do wonders for a child’s relationship with food and eating habits. I’m currently trying this with Lily and it’s working wonders. I’ll serve her normal dinner and alongside it I’ll include some frozen yoghurt with some sprinkles and some fresh berries. It gives Lily the control of choosing what she will eat and in what order. It’s working wonders, as she is mostly eating everything on her plate. If you’re going to try this, don’t be surprised when you’re child starts off always eating the “treat” food. They see it as a reward, so of course will always go for it. Give it time and see what happens, you may be surprised. Further to this, please refrain from offering dessert as a treat. It sends the message that certain foods hold more value and of course they are always going to want the treat. If you offer it all at once, it teaches them that they’re not a better person for eating one food versus the other. There are no rewards with food, it’s all just food!

Labelling foods can create unhealthy relationships from a young age. Referring to lollies as “yummy/naughty/treats” and cucumbers as “healthy/good foods” sends a message to our little ones that vegetables don’t taste as good and are something that we “should” eat. When you stop nagging kids about eating healthy vegetables, they tend to show more interest in them. Likewise, when kids aren’t aware of treat/rewards foods, it lets them decide what sounds good to them at the time without creating preconceived ideas in their heads.

This can be tricky, and I know I’ve found myself nagging my girls to eat their veggies. Constantly saying “eat your veggies” or “you’re such a picky eater” may just make things worse and also result in your child not listening to their bodies at all, it becomes a negative environment at every mealtime. Try to relax and don’t put too much pressure on your child when it comes to trying new foods. You’re job is to provide a variety of foods and let your child decide what they want and how much they want. Micromanaging never helped anyone. Ask them to try it and leave it at that. If they decide not to, don’t make a big deal out of it. Clear the food away and give it a shot another time.

This one might seem obvious, but it’s so important. Children learn from modelling and the closest people around them. Enjoy healthy eating and talk positively about it around your children. Be careful with the language you use in relation to health, weight and food. Please avoid talking about dieting or putting on weight around your children, this will only start to create negative relationships with food for your children. Instead, try talking about how food fuels our bodies and helps us function throughout the day. You are your child’s role model, and they look to you for everything.

Being a parent of a picky eater is tough. Try not to get too worked up when you attempt something, and it doesn’t work. It all takes time and patience. Even if your child goes through a stage of only eating strawberries as their fruit choice, they likely won’t live on them forever! I remember absolutely detesting avocado for many years as a child and now it’s one of my favourite foods. Kids tend to go through stages and like or dislike certain foods over a period of time before moving onto to something else. Try to focus on what they’re eating over the course of a week, rather than knit picking at every meal. If you’re really concerned, it might be a good idea to see your GP or a dietitian.

Get my FREE Clean Treats recipes

Enter your email and I’ll send you 9 of my favourite sugar-free snack recipes. They’re delicious, nutritious and easy to make!

Not ready to join the 28 family yet?

No worries! If you’d like some quick tips on getting fitter and healthier in 2020, just enter your details below and I’ll send you some of my favourite healthy recipes and workouts.